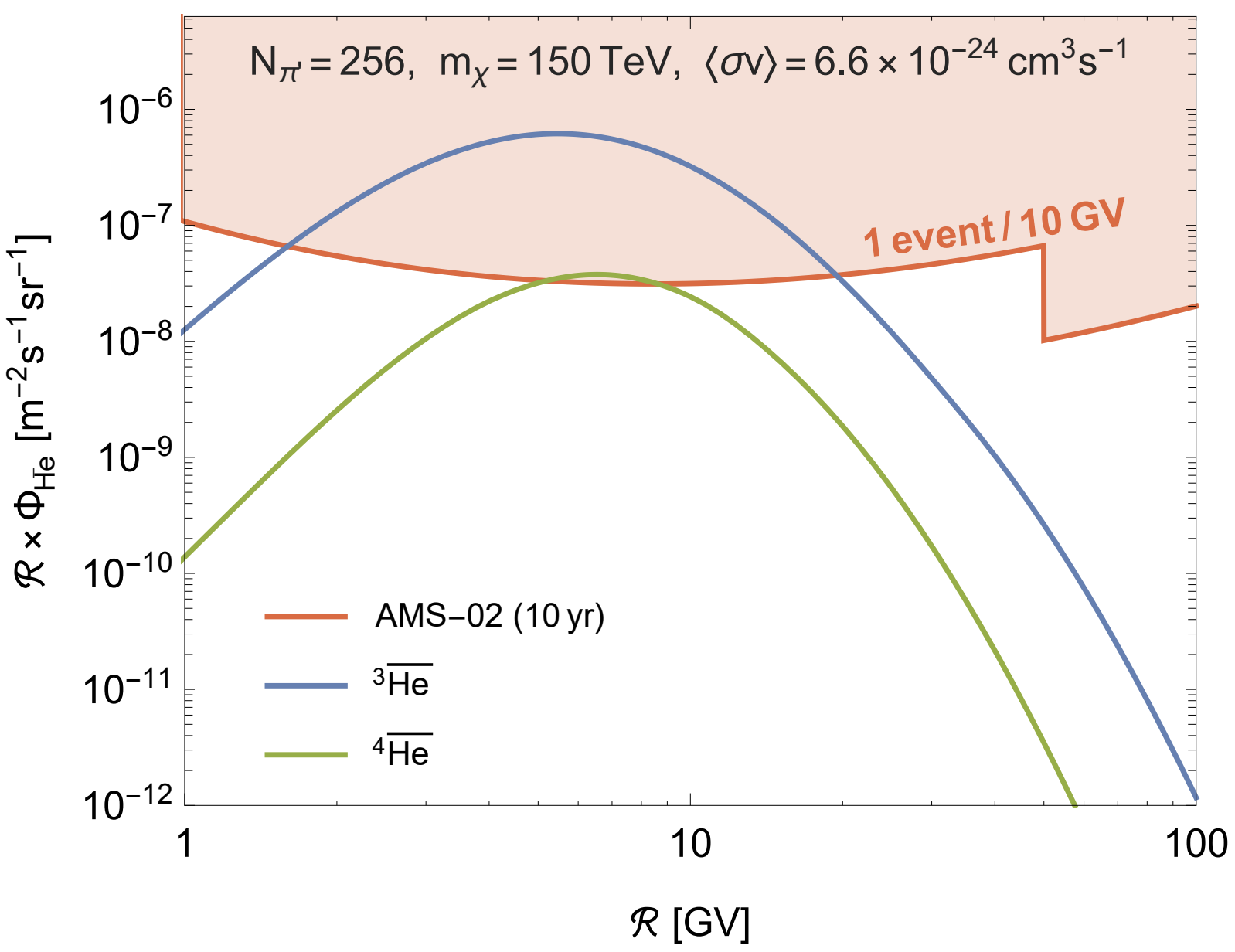 AMS-02 has tentatively detected a flux of antihelium nuclei (around 10 events in total). This observation, if confirmed, would be very exciting because antihelium is not supposed to be produced by standard astrophysics -- and would point towards new physics. More confusingly, a handful of these events may be consistent with antihelium 4 -- which is difficult to produce even in dark matter models. We propose the first realistic dark matter model capable of producing an observable antihelium 4 flux. If the WIMP is very heavy (near unitarity scale), and annihilates through a strongly coupled dark sector, then each annihilation will produce a shower of dark pions with very high multiplicity. If these particles quickly decay to standard model quarks through a portal interaction -- the result is a high multiplicity of baryons produced promptly at the same vertex. This significantly enhances the formation of heavy antinuclei, and makes observations of antihelium-4 possible. 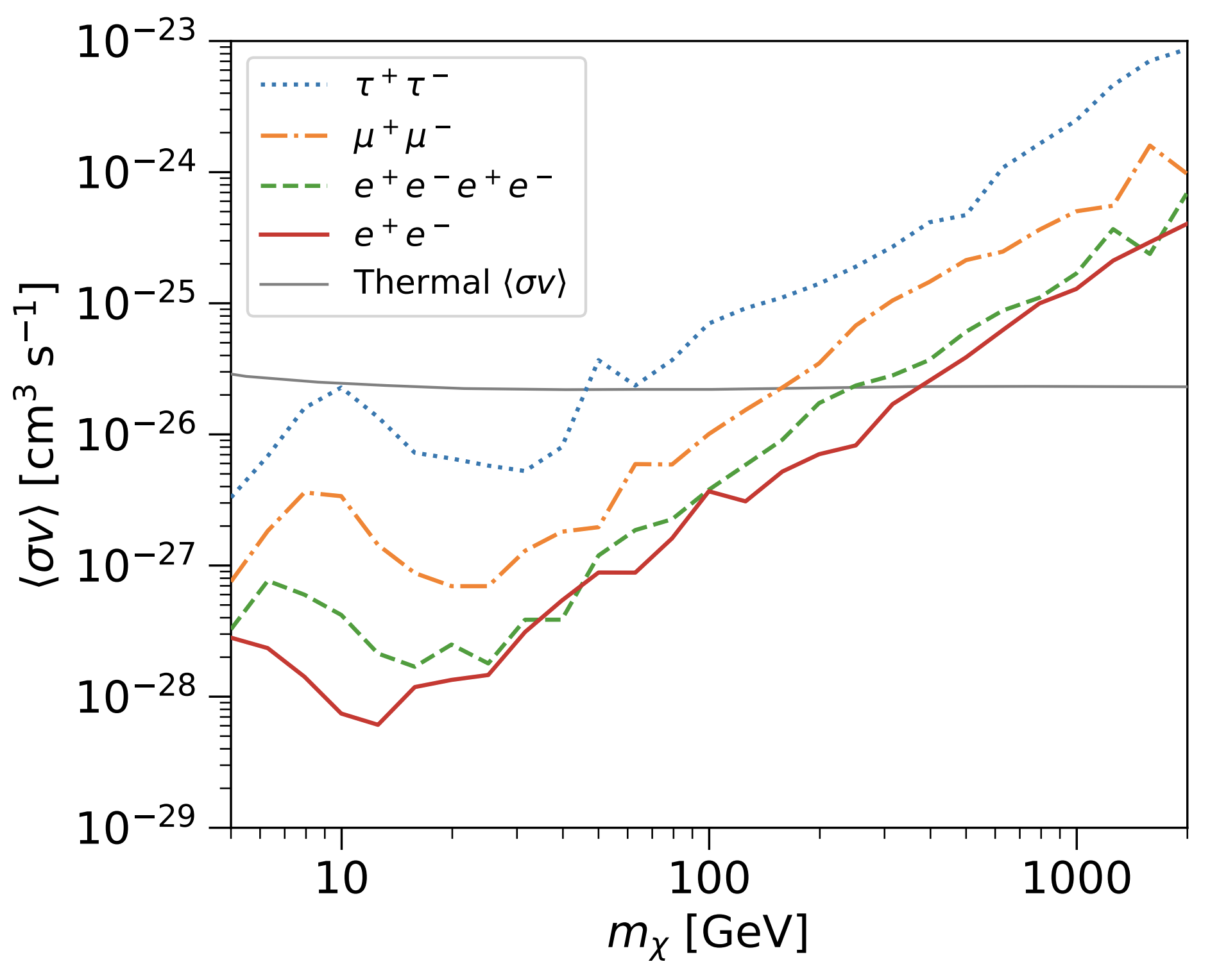 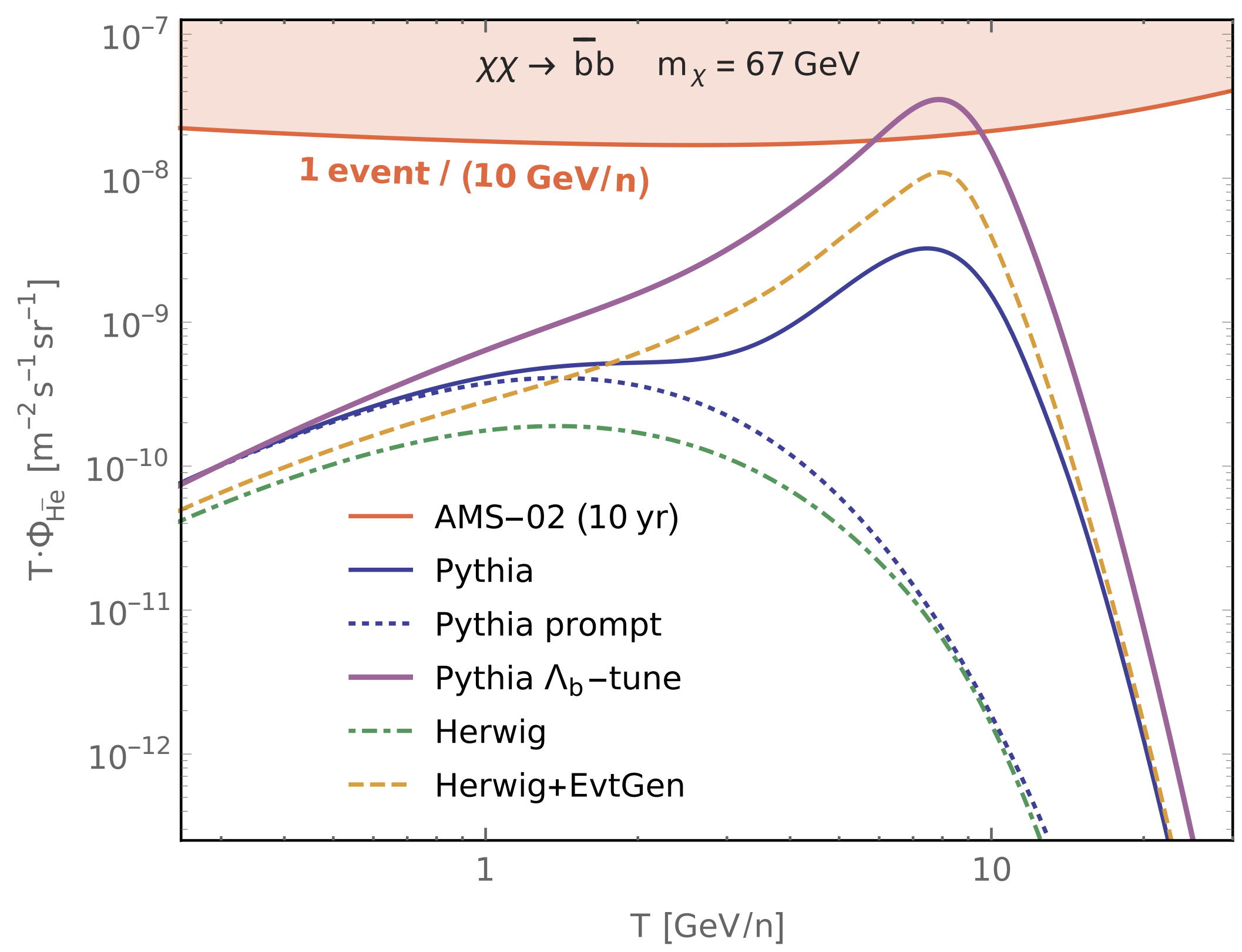 AMS-02 has tentatively detected approximately 10 anti-Helium 3 nuclei. Such an observation would constitute smoking gun evidence of new physics, because the astrophysical production of antihelium is expected to be negligible. However, most studies of dark matter annihilation have concluded that the dark matter induced antihelium flux should also be small. Here, we carefully analyze previous studies, and discover a antihelium production pathway which had been neglected by previous literature -- the displaced vertex decays of Lambda-bottom antibaryons. The optimal mass (roughly 6 proton masses) and anti-baryon number of Lambda_baryons make them optimal candidates to efficiently produce antihelium nuclei. Intriguingly, standard particle physics codes (e.g, Pythia) predict that this pathway should dominate the production of detectable antihelium, increasing the standard antihelium production rate of dark matter annihilation by nearly a factor of 100 compared to previous computations. 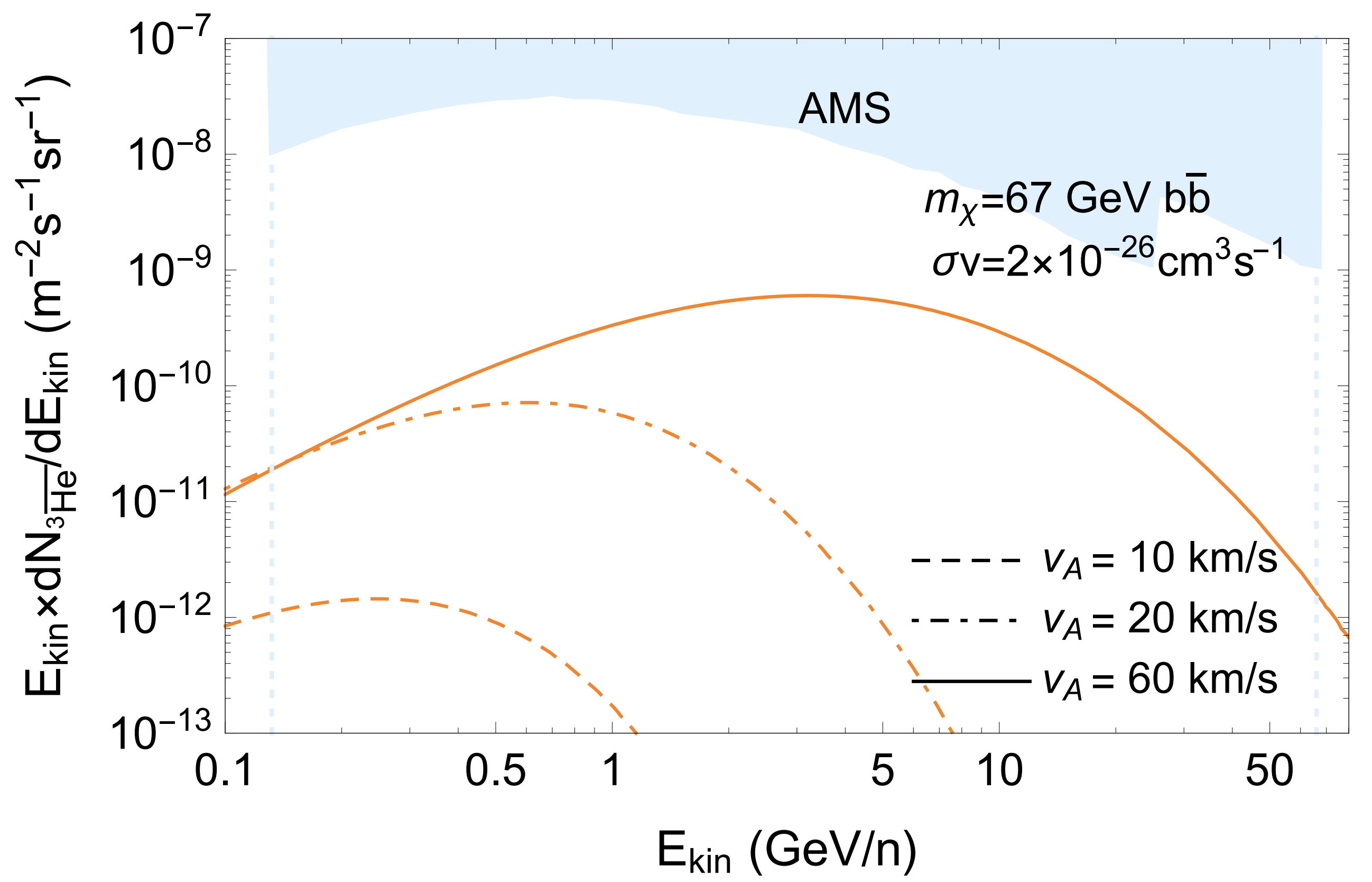 AMS-02 has reported the tentative detection of approximately a dozen anti-Helium 3 and anti-Helium 4 nuclei. Astrophysical interactions capable of making high-energy anti-nuclei are kinematically suppressed, making such a signal a potential smoking gun for dark matter annihilation. Unfortunately, it is also extremely difficult to explain such a signal with dark matter models either, due to the very small range of coalescence momenta that is capable of producing such particles. We present a new astrophysical method for enhancing the dark matter induced anti-Helium flux, by using Alfven waves to reaccelerate very low-energy anti-Helium particles to higher energies, where they may be more readily detected by AMS-02. 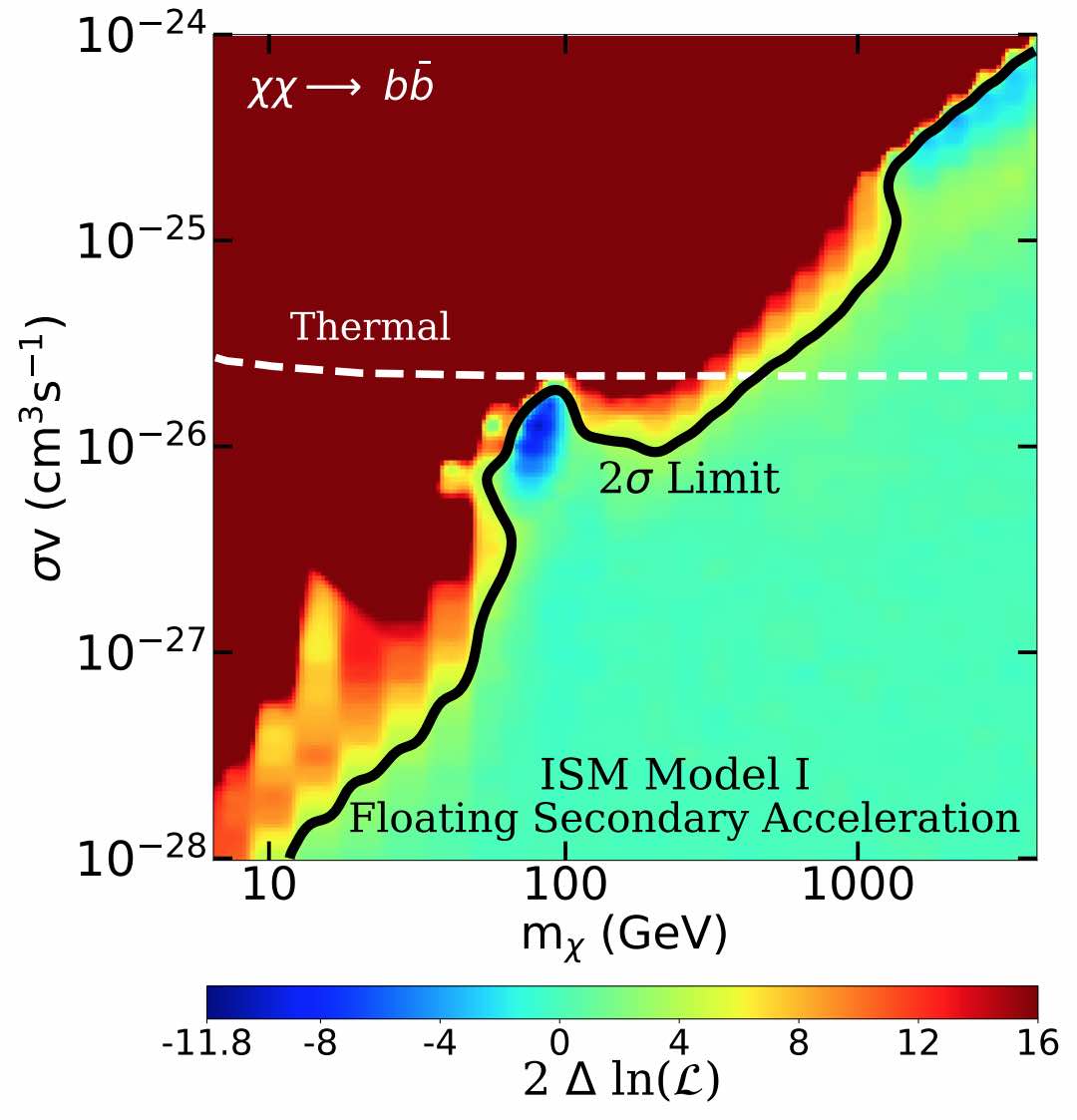 A Robust Detection of an Antiproton Excess

Previous studies by Cuoco et al (1610.03071) and Cui et al. (1610.03840) have uncovered evidence for an excess in cosmic-ray antiprotons in the AMS-02 data, centered at a rigidity of around 5 GeV. The resilience of this excess has been called into question by other analyses (e.g., Reinert & Winkler 1712.00002), which argued that uncertainties in the background modeling could decrease the significance of the signal. We utilize an improved method to constrain solar modulation and antiproton production uncertainties, and test number of diffuse emission models, finding that the statistical significance of the excess remains robust, providing an intriguing signal that remains consistent with dark matter annihilation.

2. What Does the PAMELA Antiproton Spectrum Tell Us About Dark Matter?
Dan Hooper, Tim Linden, Philipp Mertsch
Journal of Cosmology and Astroparticle Physics 03 021 (2015)

Snowmass2021 Cosmic Frontier White Paper: Puzzling Excesses in Dark Matter Searches and How to Resolve Them

Positron Annihilation in the Galaxy